No child is too young to be targeted by Israel

As we watch in horror as children are brutalized by law enforcement at the U.S. border, Israeli authorities are likewise targeting more and more very young children for arrest. Last week Israeli soldiers raided the home of a family in Hebron. The father of an eight-year-old girl was given a summons for his daughter to appear at an interrogation center. She was accused of harassing the military-backed Israeli settlers. 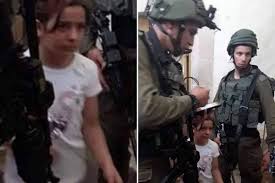 Israeli soldiers raided the home of Hebron resident Shadi Sadr last night and gave him a summons for his eight-year-old daughter Malak to appear at an interrogation centre. Her crime, the father was told, was allegedly harassing the military-backed Israeli settlers.

From the beginning—even before it was founded, actually— Israel has used criminalization, arrest, detention, and imprisonment as primary ways to deny Palestinian rights, threaten the population, and suppress the struggle for freedom and equality. The latest targeting of young children is an escalation clearly intended to further terrorize children, their parents, and entire communities.

Meanwhile, MECA’s partners in Palestine provide legal and psychological support for children who have been arrested, as well as those who have experienced so much violence and repression in their young lives.

You can read more about what happened to eight-year-old Malak and other even younger children in the articles linked below.