The Nakba continues… but the struggle is getting stronger 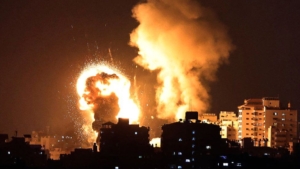 It’s May 15. On this anniversary, here we are again writing about the Nakba, the 1948 catastrophe when 750,000 Palestinians were uprooted from their homes and lands by Israeli thugs, gangs and military forces. We Palestinians have always said, the Nakba never ended. This week all the world can clearly see the bloody truth of this. As we watch around the world, we can also see another powerful truth: The Palestinian struggle is getting stronger.

Not everyone sees it at first, but if you stop to feel how the land, both past and the future, move through our children, our communities, our culture and dreams, you can feel it too.

When we do debke, our traditional dance, we stomp, shaking the floor beneath us. When the dance heats up, the dancers stomp the stage even harder—united in the rhythm. Today, Palestinians are shaking the land under the occupation, stronger than the bombs shaking the houses in the Gaza Strip. As Palestinians take to the streets, they are breathing fresh air coming from the mountains and from the sea—from our mountains, our sea—despite the tear gas, despite the stink bombs. The refugees in Gaza smell the fresh air coming from their original villages despite the huge clouds of smoke and fire throughout Gaza. From people protecting houses in Sheikh Jarrah, communities coming together to protect Jerusalem’s Old City and the villages around it, to Palestinians inside ’48 Palestine rising up in protest, every level of struggle is coming together.

This new Intifada is shocking many Israelis, who know they stole the land from the Indigenous people. They don’t want to lose the privileges they have—the beautiful old Palestinian houses, the water, the resources. They want every dunum of land, every garden, every tree, without Palestinians. They want to erase us and our history. Any voice, any act, any words that refer to Palestine, they see as a threat.

At the entrance to my mother’s village Jarash, just west of Jerusalem. It is now an Israeli “nature reserve” and the indigenous Palestinian inhabitants are not permitted to return. Palestinian historian Walid Khalidi writes, “The site is overgrown with grass, interspersed with the debris of destroyed houses and stones from the terraces. The ruins of a cemetery lie northwest of the site. Groves of trees cover two hills to the west of the site that are separated by a valley. Carob, fig, almond, and olive trees grow on these hills.”
CREDIT: Pablo Pitcher-DeProto

Of course no matter what they do, they cannot erase what is inside of us. I remember the first time I went with my uncle to see my mother’s destroyed village, Jerash, near Jerusalem. At first I thought my uncle was confused about where the village was because I didn’t see any sign of it. But my uncle made the stones talk, the trees talk, the wells talk. Slowly, slowly, my uncle built the village in front of my eyes, describing walls with windows, filling the houses with history and life. He showed me where my mom used to sleep, where she walked, where she worked the land. This is what the Zionists, after 73 years, have never succeeded in erasing. Our villages are inside us, even if the walls don’t exist any longer. And we still carry the keys of our houses, even if they were destroyed. Like Indigenous peoples of the Americas, our land, our memories flow through all generations.

Our resistance also flows beyond Palestine. During the Nakba commemoration in 2011, tens of thousands of Palestinian refugees from Syria descended on the border; some of them succeeded in getting through. One even went to visit his village. Others marched from Jordan and from Lebanon. This year, on Friday, May 14, it happened again. Thousands of young Jordanian protesters came to pray at the border with Palestine. And the same at the Lebanese border, where one person was killed. These Arab youth, they see what is happening in every Palestinian city and they want to contribute, they want to be part of freeing Palestine. And the Palestinians among them are rehearsing for the day they will claim their right to return and walk back to their villages.

What we are watching on the news can feel devastating. But listening to our friends and families in the Gaza Strip, in ‘48, in the West Bank, and in Jerusalem cheers us up because their spirit reminds us of the history of peoples who have succeeded in ending colonialism—in Algeria, in South Africa, in Vietnam.

Palestinians are marking 73 years since the Nakba by raising the struggle to a new level. These young Palestinians in the streets are many steps ahead and they are showing us the way. Words and writing are important, but actions are stronger—the actions of people fighting for their rights and the actions of people rising in solidarity. Each strengthens the other. This is the time when we need to stand together, support each other, share with each other.

The first Intifada laid the groundwork for the second Intifada. Now it seems the Palestinians have a new Intifada, and maybe it will grow into more than an Intifada. The young generation will let us know. Free Palestine!