Is the right of return possible, or is it just a romantic dream?

When I was young most of what I heard about Jarash, my mother’s village, came from her and my uncle. My mother also told me about Zakaria, my father’s village. They told many stories about life before the Nakba, always ending with “Inshallah, soon we will go back.”

I grew up in Dheisheh Refugee Camp near Bethlehem. The reality of our lives in the camp was very harsh. We were living, the whole family, in one room. We had to line up for everything: to get food from the United Nations, to get vaccinations, to go to the bathroom—two bathrooms for each 25 families. Everything was narrow: the streets, our house, our lives. I had a feeling of space only when I left the camp or in my imagination.

My imaginings were based on that phrase I heard so often, “Inshallah, soon we will go back.” In my mind’s eye, I saw dozens of trucks line up in the street in front of the camp. The camp emptied out as everyone, weighted down with furniture and supplies to take back, climbed onto the trucks. I scrambled to sit in the back of the first truck because I wanted to see everything on the way home, every tree, every hill. In my imagination, I saw trucks loaded with returning refugees coming from every direction, all heading west to our villages. The air was filled with the songs that my mother and her friends sang together, songs about their love for the land and their yearning to return.

I thought our return would happen very soon because my mother’s generation, the Nakba generation, created such a clear picture in our imaginations of that return. Sometimes there was an argument between my uncle and his children. My cousins were getting older and they didn’t want to live in two rooms. Instead, they wanted to build an addition onto their UN-issued rooms in the refugee camp. My uncle refused. He didn’t want to invest in the refugee camp. “If we build anything,” he said,” we are accepting that our lives are in this camp. Any money we have saved, we will invest in rebuilding our house when we go back to our village.”

His whole life, my uncle believed that this was something that could happen any day. He used to say, “These refugee camps, we are here only to stay alive, they are not our home.”

Now, 70 years after Nakba, my mother and my uncle have both died. Almost all of that generation is gone. In her will, my mom left me the key to our house and asked that her remains be moved to her village when we return.

In the meantime, Israel has changed a lot on the ground—building highways, walls, and settlements; planting trees; trying to erase the history of Palestine. David Ben-Gurion, the first prime minister of Israel, believed that the Nakba generation would die and the new generations of Palestinians would forget that they ever had a homeland.

And now there is a new generation. Despite Israeli efforts to bury our history, this new generation, with the stories from their grandparents and parents in their ears, hasn’t forgotten. The frustration of living as refugees remains. It is boiling, boiling, ready to boil over.

This new generation, they have their own imaginations and they are struggling to turn their dreams into reality. They want to have a good life, to make their way. But always there is this pain of not being settled and free. So they, too, in a new way, imagine coming back and ending their frustration as refugees. In 2011, we saw tens of thousands of Palestinian refugees marching from Syria to the Golan Heights to return to Palestine. Others marched from Jordan to the Jordan River, from Lebanon to the northern borders of Palestine, from the West Bank towards their villages to the west.

In Gaza now, after 11 years of siege and three major military assaults, we see an intergenerational movement to remobilize the right to return, whatever the risk. The people of Gaza have been locked in the world’s largest open-air prison—some call it the Gaza ghetto—where no-one can leave or enter. Israel keeps basic necessities out. Unemployment and poverty afflict nearly every family. The people of Gaza are dying little by little. These are the conditions that led young people to initiate the Great March for Return. Return is their only hope.

Every Friday since Palestinian Land Day on March 30th, people in Gaza have marched to the fence surrounding Gaza. They have set up tents in five locations near the fence.  Each tent is named for one of their original villages or towns. This encampment is called Al-Awda (“return”) and hundreds of families are staying there. The camp is filled with music, dance, and cooking; and with teaching and learning about Palestinian history, culture, and the 70-year struggle for freedom. The people are there to raise their voices to the world: We are fed up and we want to return to our homeland, to our villages.

These events build momentum. The feeling among Palestinian refugees everywhere is a determination to return.

The Israelis pass new laws, enact new military rules. They build more fences, more walls. They sow landmines. They shoot unarmed protesters. Because they can see that Ben-Gurion was wrong: We have not forgotten. Around the world, Palestinian refugees are almost 8 million strong—in Gaza, the West Bank, Jerusalem, inside Palestine 1948, in Jordan, Lebanon, Syria, Europe, the United States, everywhere. The new generation is taking their own initiative. “Soon we will go back”—this dream has suddenly become more practical, more achievable. We will return.

Thank you for your support and solidarity Gallery

Thank you for your support and solidarity 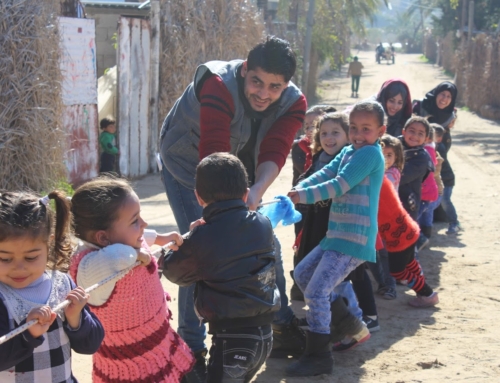 DOUBLE your year-end gift to MECA